Stupendous Tournament of Transit | GPCOG, ME
Skip to Main Content 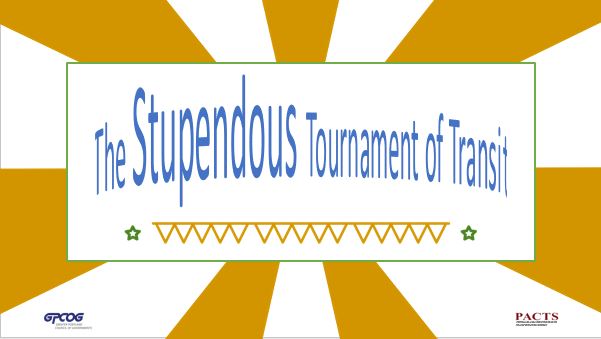 On June 14, 2019, GPCOG/PACTS held the Stupendous Tournament of Transit, a team event that gave transit decision makers and stakeholders an opportunity to experience regional transit travel firsthand. Twenty-seven people participated, including representatives from all seven transit agencies; the Falmouth, Gorham, Saco, Scarborough, Westbrook City/Town Councils; GO Maine; the Maine Turnpike Authority; Portland Downtown and Visit Portland. The participants were grouped into seven teams and each team was given different instructions (“You are a Southern Maine Community College student with an internship at GPCOG. You need to run to the Maine Mall, SMCC, and GPCOG before attending the Tournament Grand Finale at the Portland Media Center. Trains freak you out, so be sure to avoid the train. Happy trip planning!”). All teams started the day with a kickoff at the Saco Transportation Center, traveled throughout southern Maine via bus, train, and/or ferry, and met up again in the afternoon for a grand finale at the Portland Media Center.

You can learn more by viewing this presentation about the Stupendous Tournament of Transit (PDF).

In addition to giving participants firsthand experience traveling regionally by transit, the event provided an opportunity for participants to work together and develop camaraderie, facilitating teamwork around regional decision making in the future. Participants were also able to engage with, learn from, and educate other transit passengers. The event was also intended to raise the profile of transit in our region, generating articles in the Portland Press Herald and the Journal Tribune and promoting transit on social media via the hashtag #StupendousTransit. Finally, the event was a fun way to build excitement around regional transit planning. At the end of the day, participants debriefed on what worked well and what did not. They also identified what they saw as the most important things we need to do to make the system more seamless:

Building on the momentum from the event and with this input in mind, GPCOG/PACTS intends to